skip to main | skip to sidebar

At the suggestion of my trusted advisor and day-job boss, Jeannine - I've got a new packaging "thing" going on.

I was struggling to find a way to juggle cake boxes, paperwork, business cards, etc. As usual, Jeannine had the answer.

Witness, "The Info-Packet." Lovingly attached to the top of the cake box with a logo sticker:

And, the flavor card (it's a tent card so you can let people know what they're getting into):

Posted by Look Cupcake at 8:34 AM 0 comments Links to this post

Nic at T-Mobile is turning out to be one of my best customers! Here are some pics of the cakes I did for her last night.

Posted by Look Cupcake at 8:30 AM 0 comments Links to this post

My husband doesn't like chocolate. I'll wait a second while that sinks in.....

Yeah, I know. It's not normal. In fact, when I found this out on our first date I informed him that there wasn't much chance of us forming any sort of relationship. My love for chocolate runs deep. Obviously, I figured out that this would only mean MORE chocolate for me and I married him. I'm quick like that.

Anyway, due to his dislike of chocolate I've mastered some pretty good non-chocolate desserts over the years. One of the classics is Banana Pudding. I'm not talking about the kind in the box. I mean good, old fashioned, from scratch, homemade banana pudding. With real bananas. And creamy vanilla pudding made with whole milk, topped with freshly whipped heavy cream. My banana pudding has been known to nearly cause riots. It tops the list of my all time most requested dishes.

Since all roads lead to cupcakes around here, I'm sure you can see where this is going. I've been working on developing a banana pudding cupcake. The latest incarnation turned out fantastically.

First I drop a Nilla Wafer (do not - I repeat - DO NOT attempt to use generic Nilla Wafers) in the bottom of the cupcake liner.
Then I mix up banana cupcake batter, pour over the Nilla Wafer and bake. The result is a somewhat carmelized top to the cupcake with a very moist center.

The pudding is cooked up next. I'm not sure why people use instant pudding... the real stuff is almost easier to make. It consists of egg yolks, flour, sugar, vanilla, a pat of butter & milk (cocoa powder if you're going for chocolate). It's as complex as, "heat & stir until it's pudding." The pudding is rich, creamy and just the right amount of sweet. I let the pudding cool and then fill the cupcakes with it.

Finally, I whipped up a swiss meringue buttercream frosting. The whole thing was topped off with a mini Nilla Wafer and a carmelized banana slice.

Posted by Look Cupcake at 6:37 PM 0 comments Links to this post

One of my day job coworkers ordered 3 dozen mini cakes to share with her department for her birthday. I brought in WAY more than she ordered (I know this place...confection causes a feeding frenzy) and did some custom decoration as a birthday present. They turned out really cute and people are going NUTS. Here are some pics:

Posted by Look Cupcake at 8:56 AM 0 comments Links to this post

How Many Cupcake Bakers Does It Take....

Exciting times are ahead for Look Cupcake. Our new business site has been built and will launch annnnnny minute now (oh please, Interet Gods, smile upon us) at lookcupcake.com. This blog will now publish at lookcupcake.blogspot.com. You'll find a link to this blog on the business site.


Our graphic artist (Hi David! Like how you belong to Look Cupcake now?) is putting the finishing touches on the OFFICIAL Look Cupcake logo. Let the branding begin!


The recipe testing and tinkering is always in full swing. A couple nights ago I decided to try a new chocolate cake recipe to serve as the base cake for La Nina de Chocolate Diablo cupcake.
The cake turned out VERY heavy, fudge-like and moist. To give it that Mexican Chocolate kick, I add a spice blend that includes cinnamon & cayenne pepper. Not enough to make it hot - just enough to really make the chocolate pop in your mouth.


I topped this cake with edible silk. No - really. A Kahlua Swiss Meringue Buttercream that was described by someone who tasted it as, "edible velvet - I wish I were the size of my pinkie and could just lay down on it." Finished with an extra dusting of Diablo powder (powdered sugar,cinnamon & cayenne), it was seriously the shiznit. 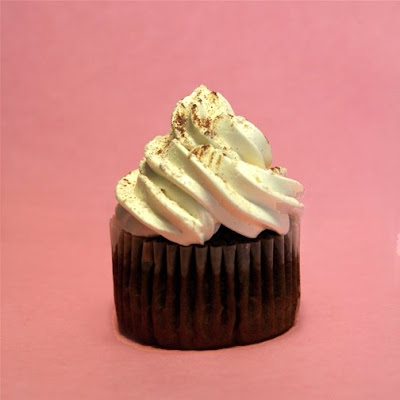 Posted by Look Cupcake at 3:54 PM 1 comments Links to this post

Tested a new recipe last night. I brought these cakes into the office today and by the reaction, I'm going say they fall in the "winner" category.

Bake up into a handsome tuxedo swirl.

Posted by Look Cupcake at 1:41 PM 2 comments Links to this post

I tested out a fantastic new recipe last weekend. I must apologize for two things. Firstly, the picture quality leaves something to be desired. (There was a little camera "issue.")
Secondly, the tardiness of my post... the last week has been a whirlwind of exciting Look Cupcake business activity. Yummy times ahead in the land o' cupcakes.

I had a novel idea. Everyone loves individual lava cakes. You know, the ones you order at the restaurant and when you cut into them a gush of warm, liquid chocolate lava oozes onto your plate? Yes, those. They're usually baked in ramekins but why not a cupcake version?


The butter and chocolate go into a bowl for melting.

Eggs and sugar are beaten together until...

All mixed together and ready for baking.

Just out of the oven. (Obviously, more batter per cup is better.)

They sink as they cool.

With a simple powdered sugar/cocoa garnish.

End result: These were AMAZING. The centers weren't liquid, but ended up very moist, gooey and brownie like. I've decided I'll finish them with with a light buttercream and fresh raspberries.

Posted by Look Cupcake at 10:43 AM 0 comments Links to this post

Other places to find Look